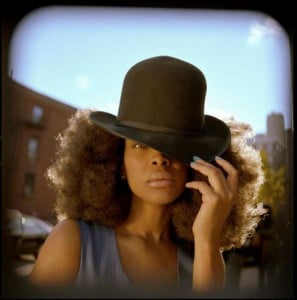 The 38-year-old Dallas, Texas, born singer says the set is called “Part II” because unlike 2008’s more conscious-driven “New Amerykah Part I: 4th World War,” she is “more free and full of life” this time around.

“I called it ‘Part II: The Return of the Ankh’ because this album is the sister of the left side of my brain — it is the right side,” Badu explained during a listening session this week at New York City’s Chung King Studios. “‘Part I was the left side of my thoughts — it was more socially political and my thought process was more analytical. This time there wasn’t anything to be concerned with — the album is more emotional and flowy and talks about feelings. It reminds of the days of ‘Baduizm’ — this is just about beats and rhymes in a cipher.”

Tracks like “Window Seat,” featuring The Roots’ ?uestlove on the drums and James Poyser on piano, finds Badu requesting “a window seat…I don’t want nobody next to me,” over drums and clasps. Meanwhile, she questions “What did I do to make you fall so far from me?” atop keyboard riffs on the 9th Wonder-produced “20 Feet Tall.”  On the banjo-laden “Don’t Be Long,” Badu pleads her lover to return soon although she understands “you gotta get your hustle on.”  She taps into her inner B-girl and pays homage to the Notorious B.I.G. on tracks like “Get Money,” which features elements of the Junior M.A.F.I.A. feat. Notorious B.I.G. track of the same title, and “Incense,” on which she harmonizes the Biggie lyrics, “there’s gonna be a lot of slow singing and flower bringing if my burglar alarm starts ringing,” over a beat reminiscent of Alicia Keys’ “Unbreakable.”  Some of the other stand-out tracks include “Fall In Love” which finds her candidly warning potential lovers, “You’re loving me and I’m driving your Benz / you’re loving me and I’m f*-king your friends;” the harp-heavy ” Out of My Mind Just in Time (Part I) (Undercover Over-Lover),” on which she pleads, “I hate for you, when I hate you too, if you want me to;” and ” Out of My Mind Just In Time (Part 2),” on which she confesses, “I am a recovering undercover over-lover / recovering from a love I can’t get over / and now my lover thinks he wants another,” over piano strokes.  ”Jump In The Air” was slated to appear on the album, but parts of it leaked on the internet earlier this week, and as a result Badu is unsure if she will include it on the set. “If anything leaks, I won’t put out this album,” she said about potential future leaks. “I worked too hard for that to happen. Let a bitch make some money some kind of way.”  The track is said to feature nine MCs including Lil Wayne and her son Seven’s father, rapper Andre 3000.

In the past six years, Badu, who has been working on this album since the release of “Worldwide Underground” in 2003, has recorded over 50 songs for “Part II.” She hopes to release an already-completed album titled “Low Down” shortly after this release.  ”New Amerykah Part I” has sold 359,000 copies in the United States, according to Nielsen SoundScan.