Posted at 20:03h in Blog, Uncategorised by Ronnie

BUT WHO DUNNIT.. SERIOUSLY WHO THE HELL DUNNIT? 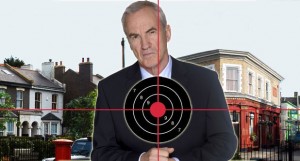 Since Christmas I’ve been speculating with my family, friends and twit-familia about who merked Archie with the Queen Vic and literally everyday it changes. Ronnie, I know you’re involved in the Eastenders hype too!

These are my TOP suspects.. 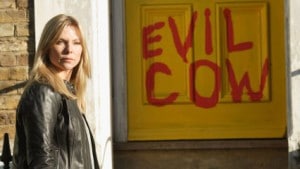 Ronnie hasn’t been shy about her feelings towards her dad throughout and to be fair he did basically ruin her life.

He told her the daughter she gave up was dead, then when she was actually back on ends looking for her mama he lied to poor Danielle. Anyway, cut a long story by the time poor Ron found out who Danielle was, Janine licked down her down.

Oh, and THEN when she finally got pregnant, he made her miscarry by pushing her into the bar when they were arguing.

Not to mention, Roxy was slyly the favourite.

Although she was arrested and released and had a moment when she realised, rah my dad’s actually dead, as of now she’s acting kinda nuts. From when she can poke holes in a mans condom ANYTHINGS POSSIBLE.. 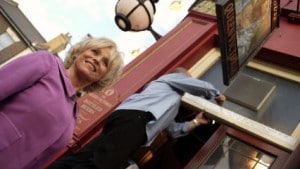 The man lied to her, tried to make her dress like the late, great Pauline Fowler, broke her heart and then tried to take her pub. ARE U SICK?! That’s reason enough to done his dance surely!

PLUS, she’s leaving Walford soon.. she could be fleeing coz she’s guilty or she could be gettin locked up.. ooo 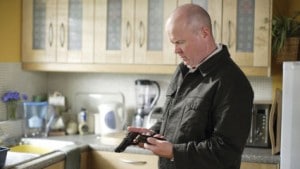 Peggy wanted him to kill Archie, and when he didnt she called him out, basically sayin he was watless and GRANT would have dealt with the matter, thus making him spiral into a drunken mess for a good couple months. (He’s cool now though, imagine if all drunks could be cured as quick as Phil..) Then there was the whole thing with the bloody shirt his ride or die biatch Shirley got rid of for him. He’s blatently a suspect just because he’s Phil, and Archie did more than step on his toes when he married Peggy..

SAM ‘WHERE’S UR NOSE AT’ MITCHELL 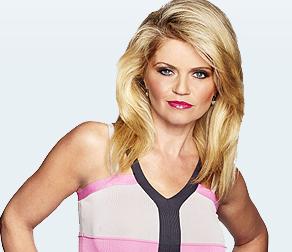 She looked at the Queen Vic and her uglyness made it fall on him!

Nah i’m lying. Archie set her up differently, used her to wind Peggy up, then sent her off to make sure they lost the bail money (Ronnie’s money, he hated her man, why Archie why??)

When Sam finally came back, she held a box from her mum, was all emotional and that and again, emotion counts for alot of deaths in E20. Boy. 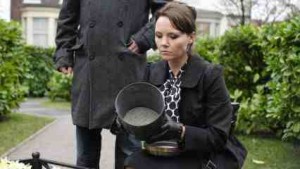 I don’t actually think Janine killed Archie because I think her daddy issues actually made her love Archie like she did her dad. But having said that, she did marry Barry for his money then kill him coz it didnt go her way, which COULD BE the case here when Archie used her to get the pub then when he got it slung her out in her undies. (That was a really long sentence, sorry dudes) But the WHOLE square is pointing the finger at her coz shes a mad girl and shes killed 2 people (she run over Danielle as well) especially the Mitchells who have a vendetta against her. PLEASE SEE BIG BOLD WRITING AT THE END! 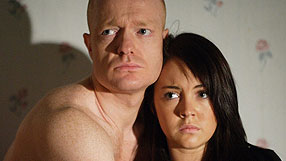 Look at him.. with his sons woman.. filth.

Anyway yeah, I don’t think he’s really got all that much reason to want to wipe Archie out but he did take the piss out of him one time.. Remember when Max was broke and asked Archie for a loan and Archie was like ‘Yeah I’ll borrow you score, BRING ME BACK MY CHANGE’  Liberties! And if I remember rightly Archie got a hold of Max’s Merc too. 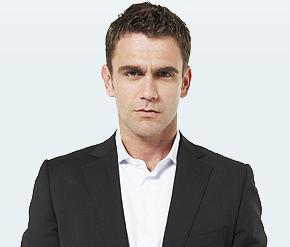 Jack and Ronnie had quite an intense, deep, wierd relationship but ultimately it failed because of the poor girls daddy issues. When she poked the holes in the condom it was too much for Jack which ended their relations. Not to mention, he’s just a bad man. I don’t think he’d be as shook as to lick a man over the head with a statue though. Unlike… 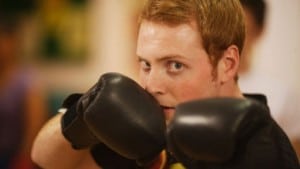 We know Bradley gave Archie a box but Bradley’s actually quite emotional. He’s ALWAYS crying! And when it comes to Stace, who knows NOW what he might do for his woman. She’s been through a lot and them Branning men don’t really think before they act. So he COULD have left the Vic after clobbering him, gone outside with his bloody fist, got heated and thought, nah Archie you’re taking the PISS, Stacey wasn’t well, I WANTED IT TO BE MYYY SEED, NOOO, then BLAM…

Have I missed anyone?

We find out in a LIVE episode on FRIDAY. I’M SO EXCITED!

JANINE IS LOOKIN LIKE SHE’S GONNA GET WRAPPED UP, BUT RYAN IS ALSO LOOKIN VERY ROSY IN THE CHEEKS!

But the Malitia are looking awfully smug in their inspector gadget coats..