Posted at 14:55h in Blog, Uncategorised by Ronnie 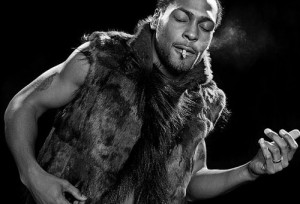 D’Angelo’s last album was released ten years ago. His last interview? Nine years ago. In the time that has elapsed, we’ve heard very little from the reclusive artist. That is until last week, when TheUrbanDaily got a call saying that he wanted to talk.

The interview was conducted over the phone, so don’t ask what he looks like these days. We don’t know if he resembles the diesel D’Angelo from the “Untitled (How Does It Feel?)” video, or the scruffy, chubby D’Angelo that the paparazzi have caught over the last few years. TheUrbanDaily can’t tell us what any of his new songs sound like because they were forbidden to ask about them, nor any specific details about his new album, though there are whispers that there are over a half-dozen great new uptempo tracks. Discussing his personal struggles were also off limits.

So what exactly did D want to talk about during his first interview in nine years? Turns out that it’s his recent discovery of an old Black rock group from the 1970s and his infatuation with the more recent musical and cultural movement called Afro-Punk, both of which might be clues about where he’s headed.

TheUrbanDaily: How are you?

D: I just got turned on to this group called Black Merda that I’m just kinda beating myself up over because I’d never heard of them before. I think about a couple of months ago, my boy turned me on to them. I’m just revisiting groups that are basically looked at like funk groups or funk artists, but I’m looking at it differently now. These guys who were really trying to push the envelope back then, I think they were just a head of their time as far as black rock is concerned.

TUD: Oh, so Black Merda’s from back in the day?

D: Yeah! Black Merda’s from 1969 or 1970 and they were on Chess Records. I’m also listening to s**t like Rick James, The Bar-Kays… These guys were like black rock & roll.

TUD: In listening to stuff like Black Merda and thinking about the multi-dimensionality missing from today’s Black music, is this influencing the stuff that you’re doing now?

D: Uhh, yeah. Definitely. I think it’s just the whole over-influx of what is stereotypically seen as Black music today, or hip-hop today, or Black culture or what have you. Just looking for alternative s**t that’s unquestionably, unmistakably Black, and doesn’t fit into this whole — what I feel is like minstrelsy almost.

TUD: Does it feel to you that in the past 10 years that Black difference has become almost impossible? What used to be a rainbow of offerings 20 years ago seems to be different flavors of the same s**t.

D: I don’t think so. I think it’s out there, but there’s a lot of folks, people in power, record executives or what have you, that are less willing to take chances on s**t that might be different. But I think there’s a underground bubbling up under. A lot of Black folks are trying to do different s**t or they wanna do different s**t. I don’t know the condition of what’s going on in the business right now, but they’re having a hard time cracking through. (Afro-Punk co-founder) Matthew Morgan turned me on to what he was doing probably a couple of years ago. I think it’s the s**t. I love it. One night we were at Raphael Saadiq’s studio and Bootsy Collins came through. I was trying to get in touch with Angelo from Fishbone, but he gave me the DVD of the AfroPunk film. But I’d been branching out and picking up on Bad Brains and s**t like that.

TUD: Do you ever envision yourself coming a little closer to that collective, either performing at the festival or collaborating with those artists?

TUD: Not this year, but maybe next year.

D: Yeah. I’m really just focusing on getting this album together.

TUD: We’ve touched on inspirations from the past, but are there any new artists who are inspiring you right now?

D: Yeah, but it’s funny. I don’t really want to get into that. I’m just kind of focusing on my s**t right now.

TUD: So in the midst of the creative process, you have to keep things very close and keep yourself sheltered from all the back and forth, from all the speculation and I completely understand that. But what is it that you want folks to know about you, about your music.

D: I just want them to know that I’m coming. That’s all. I’m in the kitchen and I’m cooking up something real nice.