Posted at 22:21h in Blog, Uncategorised by ronnie 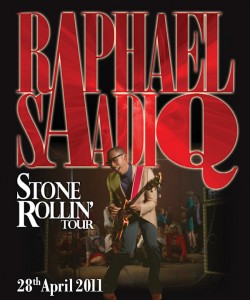 Legendary soulster Raphael Saadiq is coming to the UK to perform at London’s Shepherd’s Bush Empire on 28th April 2011.

One of music’s most highly regarded recording artists and producers, Saadiq is set to release his fifth studio album Stone Rollin’ in the US in March 2011. The album includes new singles ‘Stone Rollin’ and ‘Good Man’, and celebrates the classic sounds of 60’s and 70’s soul with a futuristic twist.

Since the release of his last album ‘The Way I See It’ which earned him 3 Grammy Nominations, Saadiq has been touring across Europe, the States and Asia. The album, which featured Stevie Wonder, Jay Z and Joss Stone, was also chosen by iTunes as their ‘Album Of The Year’ in 2008.
Very big indeed, and as a fan i shall deffo be there on Thursday April 28th.

I’ll be dropping Good Man from his forthcoming album on my BBC Radio 1xtra R&B show this Monday 24th Jan from 10pm.
Don’t miss that either!
1ne
RH